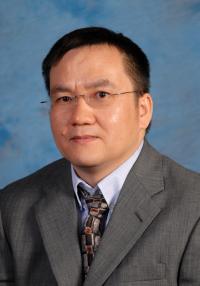 Dr. Li Shi is a Professor of Mechanical Engineering and Materials Science and Engineering in University of Texas at Austin. He spent close to a decade in combustion research, which resulted in a bachelor degree in Thermal Engineering from Tsinghua University at Beijing in 1991, a master degree in Mechanical Engineering from Arizona State University in 1997, and four-year industrial research experience in between. His invention of micro-devices for studying thermal physics in individual carbon nanotubes earned him a doctoral degree in Mechanical Engineering from University of California at Berkeley in 2001. Dr. Shi investigated thermoelectric cooling as an IBM Research Staff Member for a year before moving to UT Austin in 2002 to build a program at the interface between thermal sciences and materials sciences. One focus of Dr. Shi's research is on thermal transport and thermoelectric energy conversion in nanostructured and complex materials. His research group has demonstrated a set of unique methods based on nanofabricated measurement devices and scanning probe microscopy to characterize energy transport in individual carbon nanotubes, graphene, nanowires, thin films, and nanocomposites. The publications from these groundbreaking works have been highly cited, and have led to a better understanding of thermal transport processes in nanomaterials especially carbon nanostructures. Based on the findings from some of these fundamental research efforts, high-performance thermal and thermoelectric devices are being developed in his group for thermal energy storage, vehicle waste heat recovery, and solar energy utilization. His other research efforts include thermal management of nanoelectronic devices, and nanotechnologies for drug delivery and biomedical imaging. Among Dr. Shi’s synergetic activities, he has co-organized a NSF sponsored workshop on Nanotechnologies for Solar and Thermal Energy Conversion and Storage and the Seventh US-Japan Joint Seminar on Nanoscale Transport Phenomena, served as the program chair for the ASME 3rd Energy Nanotechnology International Conference, and chaired a number of symposiums and sessions for Materials Research Society (MRS), American Physical Society (APS), and American Society of Mechanical Engineers (ASME) conferences. He currently serves as the Editor-in-Chief of Nanoscale and Microscale Thermophysical Engineering. Dr. Shi’s research achievements and professional services have been recognized by the Faculty Early Career Development (CAREER) Award from the National Science Foundation in 2003, the Young Investigator Award from the Office of Naval Research in 2004, the ASME Transaction Journal of Heat Transfer Outstanding Reviewer Award in 2005, the Myron L. Begeman Fellowship in Engineering at UT Austin since 2007, and the O’Donnell Award in Engineering from the Academy of Medicine, Engineering, and Science of Texas in 2013.